The system enables riders to open a rear side door as they approach it via a hand gesture (similar to a kick motion for a power liftgate) or tapping near the handle.

Now the supplier is readying an enhanced version that will launch on several upcoming production vehicles in 2023.

The improved unit is smaller, lighter, more efficient and less expensive, according to the supplier. This improves packaging flexibility and enables the device to be designed into existing vehicle architectures, without requiring an additional inner door panel.

The miniaturized drive unit is about one-third lighter (1,200 g) and slimmer (60 mm) and 10% shorter than the Volvo application. The integrated system includes an electric motor, gearing, spindle drive, push rods and bracketing that attaches to the door. 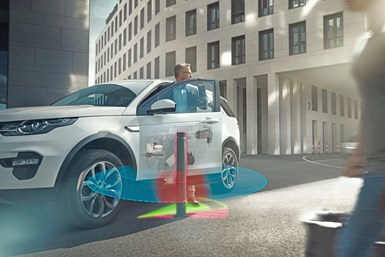 Sensors prevent the door from closing on a person’s body—similar to pinch sensors on electric windows—or opening into an object. A new near-field radar sensor that also is launching in 2023 determines if it’s safe to open a door and how far it can open, explains Arnd Herwig, Brose’s vice president of development and engineering.

The system also can be teamed with a keyfob or smartphone app to authenticate a user before opening. Welcome messages could be illuminated on the ground or in the door window.

The technology also can assist seated passengers in opening or closing the door.

He notes that the system is especially useful when operating a heavy door of a large vehicle parked on a steep incline.

Brose has contracts with three carmakers for 2023 applications, starting with an all-new electric SUV in North America.

In addition to the side door system, the SUV will feature an automated hatchback that can swing open from the side.

Future applications could be coordinated with swiveling seats and a retractable steering wheel to make it easier to climb into and out of the vehicle.

While initial applications likely will be limited to options on high-end vehicles, Brose envisions the technology quickly spreading to widespread use in mainstream models.

“Look at power liftgates,” Herwig says. “They started out on a handful of vehicles but now are on virtually all new truck models.”

Future autonomous vehicles, such as the Uber-Volvo robo-taxis, also are a prime target. “It’s almost a necessity,” Herwig notes. “People forget to close door when they get out.”