Much of the development activity surrounding electric vehicle batteries has been on increasing energy capacity, which can boost driving range and customer acceptance.

But China’s BYD Auto asserts that equal attention needs to be focused on improving safety to alleviate concerns about EV batteries catching fire after an accident or, in some cases, when standing still. There have been several high-profile incidents in recent years, including one last year that involved a parked Tesla Model S in Shanghai.

Safety and range don’t have to be mutually exclusive. BYD claims its new Blade lithium-iron-phosphate (LFP) battery significantly reduces fire risks and can extend range by as much as 50%. 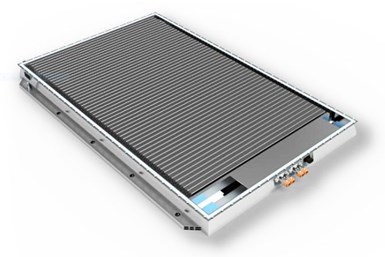 The battery features a thinner, longer cell design. This results in a flatter, stronger pack with a 50% improvement in space utilization compared with conventional cell designs, according to the carmaker.

BYD says the shape increases the overall cooling area of the battery and reduces the chance of short-circuiting. The carmaker lists four advantages of the configuration:

In addition, the Blade pack is said to be more durable and purportedly can serve as a structural component of an EV.

To demonstrate the new design’s capability, BYD conducted nail tests on the Blade. The test drives a nail through the battery, which typically causes thermal runaway with escalating temperatures that can spark a fire. Most conventional batteries fail the test.

As shown in the video above, the Blade battery emitted neither smoke nor fire after being penetrated. Its surface temperature reached only 60°C.

By comparison, a nickel-cobalt-manganese lithium battery exceeded 500°C and “violently burned.” A more typical lithium-ion battery incurred surface temperatures ranging from 200° to 400°C, although BYD notes that no flames or smoke were emitted.

The Blade also passed other extreme test conditions, such as being crushed, bent, heated in a furnace to 300°C and overcharged by 260%. None resulted in a fire or explosion.

BYD and its FinDreams Battery Co. unit have developed the technology over the last several years. 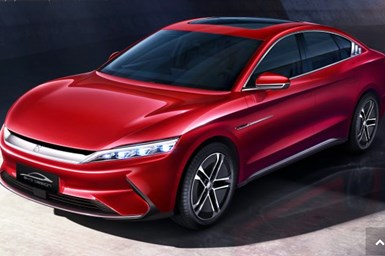 The carmaker plans to launch the Blade battery this summer in China in its flagship Han electric sedan. According to BYD, the car has a driving range of about 375 miles (presumably on the WLPT test cycle) and can sprint from zero to 62 mph in 3.9 seconds.

In addition to using the battery in its own vehicles, BYD says it is in discussions about supplying the Blade to several other carmakers. Company officials boast that the technology has the potential to “redefine safety standards for the entire industry.”