The Frankfurt auto show is packing up and heading elsewhere.

The move marks the end of a 69-year run in Frankfurt and follows an abysmal show last September that saw public attendance plunge 31%.

VDA, the German auto industry trade group that stages the show, says it wants to recast the event as a celebration of smart-city mobility. The group is mulling whether to hold the next event, not due until in September 2021, in Berlin, Hamburg or Munich.

The Frankfurt show bills itself as the world’s largest vehicle show. But it was pushed into a sobering review of itself last year when 22 brands opted out of the event. Among the heavy hitters missing in action were Citroen, Fiat, Jeep, Nissan, Toyota and Volvo. 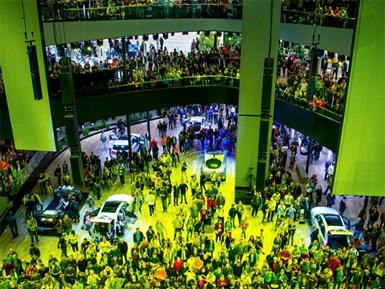 Some pundits warned that, if the trend continues, Frankfurt would soon drop to second-tier status.

Paris, whose biennial show alternates with Germany’s, has been picking up the same signals. Last year that event vowed a “radically redesigned” show with a heavy business-to-business component when its turn to innovate comes up this autumn.

These changes are being driven by carmakers. They are weary of spending small fortunes on static, cars-on-carpet displays of their wares. Manufacturers increasingly are turning to cheaper and more targeted alternative events to get their messages across.

Carmakers also want to demonstrate, not just talk about, their technologies. They’re eager to stage “experiences” for consumers through so-called activations that show what their vehicles can do.

Suppliers are just as keen to give consumers direct exposure to everything from wireless services and advanced in-car entertainment systems to driving aids and convenience features.

Detroit will be the first of the top international shows to take on these challenges. This year it shifts from the dead of winter to early June and intends to take full advantage of the improved weather.

The show’s traditional downtown location in the TCF Center (formerly Cobo Center) will expand by 14 acres outside. Additional mobility-related activations are planned throughout downtown Detroit in parks and other public areas.

Each of the world’s largest auto shows will bring its own take on how to handle the auto industry’s upheaval. One thing is clear: The status quo won’t cut it.