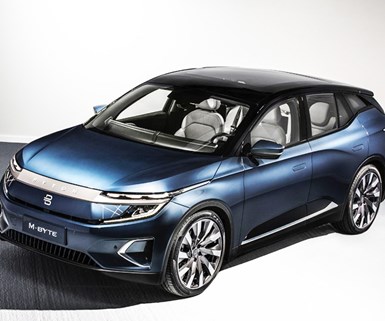 The vehicle is virtually identical to the concept unveiled in January at the CES electronics show in Las Vegas. The company aims to launch sales in China by mid-2020—about six months later than originally planned—followed by Europe and North America in 2021.

Byton claims to have 50,000 reservations for the vehicle, most of which are for customers in China. Pre-ordering in Europe and the U.S. will begin early next year.

The base model will feature a 72-kWh battery that provides a 360-km (224-mile) range using the WLTP protocol. The electric motor generates 268 hp.

An all-wheel-drive variant with two electric motors increases output to 402 hp. Buyers also can opt for a larger capacity battery (95 kWh) that extends range to 460 km (286 miles). The battery can be replenished to 80% capacity in 35 minutes using a 150-kW charger.

The interior retains the concept model’s distinctive 48-inch curved “shared experience display,” which the carmaker boasts is the largest infotainment screen in the industry. The system is divided into three sections: driver information—including images from three rearview cameras—navigation and multimedia playback for front-seat passengers. 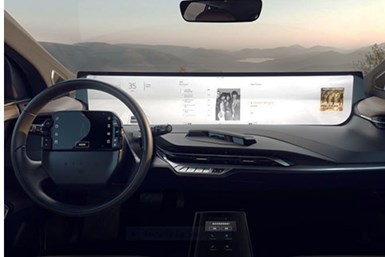 Drivers can access information on the display via a 7-inch touchpad mounted in the steering wheel above the airbag module. A second 8-inch touchscreen is mounted in the center console for front-seat passengers. Occupants also can use voice commands through Amazon’s Alexa digital assistant) to interact with the systems.

Byton opened a new headquarters earlier this year in Nanjing, near the company’s 8.6 million-sq-ft manufacturing plant.

The company says it is about to close the $500 million in a funding round announced in January. Investors include Chinese carmaker FAW Group and the industrial investment fund of the Nanjing municipal government.