The bulk of Cadillac’s lineup—and perhaps all of it—will consist of electric vehicles by 2030, the company says.
#Infiniti #GeneralMotors #Audi

The bulk of Cadillac’s lineup will consist of electric vehicles by 2030, and the brand could even do away with piston engines entirely by that time. This isn’t industry speculation. It’s straight from Cadillac President Steve Carlisle.

"We will be in a position to be 100% electric by the latter part of the decade," Carlisle told reporters today. Which, he quips, could signify “the end of the ICE age for Cadillac," as in no more internal combustion engines.

That’s saying something. The luxury brand currently offers no electrified models, and its previous attempts to do so didn’t go well. These include a hybrid variant of the flagship Escalade SUV, a plug-in hybrid CT6 sedan and the Chevy Volt-based ELR hybrid coupe. The latter was discontinued in 2016, with just 2,300 sales to its credit in three years.

It’s not just Cadillac. General Motors as a whole has severely lagged the industry’s electrification push. But the company is planning to launch 20 EVs globally by 2023, with Cadillac leading the charge. 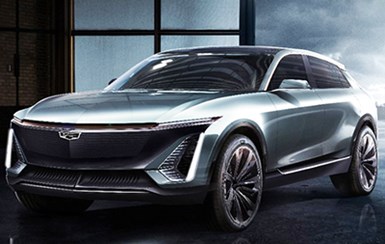 The models will be built on a dedicated EV platform. Announced two years ago, the so-called BEV3 architecture can accommodate a wide array of body styles with front-, rear- and all-wheel drive electric powertrains. The first BEV3-based Caddy will be a large crossover, which was previewed in January and is expected to hit the streets by 2022. Carlisle also confirmed earlier reports that a full-size electric SUV is in the works, which could be sold under the Escalade name.

There’s also good news for traditionalists, who will be able to quench their ICE cravings for at least another 5-10 years. Carlisle says current piston-powered models likely will get mid-cycle makeovers early next decade. In some cases, they could compete in the same segment as future Caddy EVs. But he foresees no hybrids or fuel cell-powered cars.

By Any Other Name

Cadillac’s transition to EVs will be accompanied by a new naming convention. This will spell an end to the brand’s 5-year-old alphanumeric system—CT4 through CT6 for cars and XT4 through XT6 for crossovers—which itself replaced an earlier three-letter designation (ATS, CTS, SRX). Confusingly, a mix of both types of monikers was used for several years.

While the alphabet soup has long worked well for German (Audi, BMW and Mercedes) and Asian (Acura, Genesis, Lexus and Infiniti) luxury marques, the practice fell flat with Cadillac customers. Lincoln came to its senses and began switching back to real names three years ago.

Does this signal a revival of classic Caddy nameplates such as Brougham, Coupe de Ville or Eldorado? Maybe. Lincoln has resurrected the Continental, Aviator and Corsair badges, although the latter two weren’t previously well known.

More important for Cadillac’s future will be the popularity of models with a two-letter designation: EV.