Shortly after introducing the CT4-V and CT5-V performance sedans a year ago, Cadillac hinted that even higher-octane variants were in the works and has being teasing them ever since.

While still short on details, Cadillac has officially confirmed the program and revealed the ultra-performance models will carry the luxury brand’s Blackwing moniker. But they won’t get the 4.2-liter Blackwing V-8 engine that powered the short-lived CT6-V. 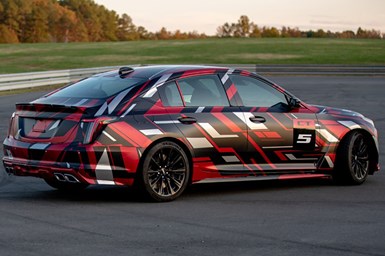 The new track-capable CT4-V Blackwing and CT5-V Blackwing sports sedans will feature a specially tuned chassis, vehicle control technologies and a manual transmission option. Caddy points out that the latter is a rarity for a luxury nameplate (or most any model sold in the U.S.) these days.

The self-shifter reportedly will be in the form of a 6-speed gearbox. A 10-speed automatic also is expected for those who want the work done for them.

What’s Under the Hood?

Both outputs are more than respectable, except when they’re compared to the much acclaimed ATS-V and CTS-V—the models they purportedly replaced in Caddy’s lineup. By comparison, the ATS-V was rated at 464 hp with its 3.6-liter V-6, while the CTS-V’s supercharged 6.2-liter V-8 kicked out 640 hp.

The namesake Blackwing V-8 in the CT6 generated 550 hp.

Cadillac hasn’t announced what engines will power the Blackwing cars. But it says prototypes of the new models have bested the lap times of the ATS-V and CTS-V during testing at the Virginia International Raceway earlier this year.

As a result, media reports speculate that the CT5-V will be equipped with the same 6.2-liter V-8 that powered the CTS-V. The smaller CT4-V is expected to get a new turbo V-6.

But where does the name come from? Cadillac adopted the family crest of Antoine De La Mothe Cadillac, the founder of Detroit for whom the company was named, as its original logo in 1905. The crest featured merlette black birds, which for some reason are usually depicted without feet or beaks. But they have prominent black wings and apparently are very fast, at least they are expected to be in the guise of the new Caddy V cars.