The public debut of Cadillac’s new all-electric Lyriq SUV has been postponed again, this time by the coronavirus outbreak.

The crossover, which General Motors presented to reporters and analysts last week, won’t go on sale until 2021. The vehicle had been scheduled for an unveiling in Los Angeles on April 2. Now Cadillac says it is developing a Plan C.

Last December, reports speculated that GM originally intended to debut the Lyriq in concept form during January’s CES in Las Vegas. That plan apparently was scuttled by the protracted United Auto Workers union strike against GM, which made it impossible to get a prototype ready in time. 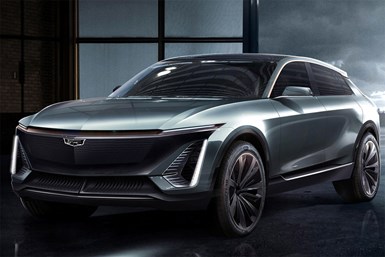 A sketch of the Cadillac Lyriq crossover vehicle.
Image: Cadillac

The latest delay is another snag in the kickoff of GM’s orchestrated, $20 billion effort to assert its EV creds. Luckily, a postponed show biz debut won’t have an impact on the actual launch of either the Lyriq or the company’s broader EV rollout.

General Motors has been mum on details about the Lyriq. The EV will be roughly the size of Cadillac’s 4-year-old XT5 crossover. The vehicle will ride on GM’s new BEV3 platform, which was designed for front-, rear- and all-wheel-drive EVs.

The platform also can accommodate a variety of iterations of GM’s upcoming Ultium modular battery system. The flexibility will allow batteries that hold anywhere from 50 kWh to 200 kWh of energy.

In real-world terms, that means a whole bunch of options concerning driving range and/or acceleration for the Lyriq, not to mention the long list of additional EVs GM has in mind.