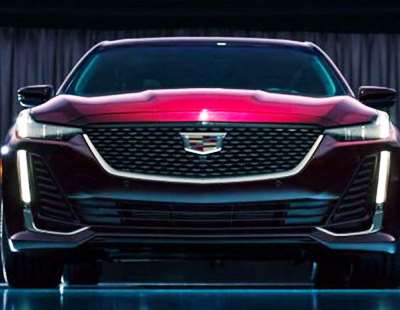 The 2020 model will replace the CTS in Caddy’s lineup. Production of the CTS at GM’s Lansing Grand River Assembly plant in Michigan is expected to end in June, with output of the CT5 ramping up there later this summer.

The CT5 will be built on an updated version of GM’s rear-wheel-drive Alpha platform, which carries the CTS, smaller ATS sedan and Chevrolet Camaro muscle car. Two trim level packages will be available: Sport and Luxury.

The only image of the interior, which Cadillac describes as a “driver-centric” cockpit, shows an electronic gear shifter and a rotary controller for the infotainment center. The latter is a departure from the haptic-based system used in the CTS.

Buyers will have two engine options: a turbocharged, 2.0-liter 4-cylinder engine or a twin-turbo 3.0-liter V-6. Each is mated with a 10-speed automatic transmission. All-wheel drive is optional.

Prior to its New York debut, Cadillac will release a series of teaser videos that use so-called autonomous-sensory-meridian-response (ASMR) techniques. The videos, which will be shown on various social media platforms, accentuate vehicle sounds—engine noise and Bose speakers—and visuals to elicit pleasurable sensations from viewers. Several other companies ran ASMR-type commercials during last month’s Super Bowl game.