General Motors Co.’s Cadillac unit will introduce an upgraded version of its Super Cruise semi-autonomous driving system next year as it expands availability of the technology throughout its lineup by 2021.
#Cadillac #tech #GeneralMotors 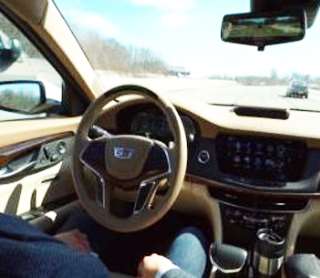 General Motors Co.’s Cadillac unit will introduce an upgraded version of its Super Cruise semi-autonomous driving system next year as it expands availability of the technology throughout its lineup by 2021.

The upgrade will include the capability to make over-the-air software updates and unspecified performance enhancements, Cadillac Executive Chief Engineer Brandon Vivian tells The Verge. He describes the improvements as a “half-step” to a next-generation system.

The current Super Cruise, which was launched in late 2017 on the flagship CT6 sedan, allows for hands-free driving with adaptive cruise control under certain conditions on divided highways. But the system doesn’t allow for automated lane changes or merging onto and exiting highways.

The SAE Level 2 system uses high-definition GPS and an array of cameras, radar and lidar sensors to track the vehicle’s position. An interior camera monitors the driver for readiness to resume control of the vehicle if necessary. Vivian says the carmaker is evaluating different camera positions and the use of other sensors to eliminate limitations caused when the driver’s face is in direct sunlight.

Vivian says CT6 vehicles equipped with the system operate in Super Cruise mode about 70% of the time when driving on divided highways. The feature is a $2,500 option and is available only on vehicles that also have a separate $3,100 driver-assist package.

The CT6 is being phased out this year. The next model to get Super Cruise will be the all-new CT5 midsize sedan, which will be launched later this year.