Starting next year, Californians will be able to have groceries and other goods delivered to them via a self-driving vehicle—with or without an onboard backup driver.
#Ford #Waymo #GeneralMotors

Starting next year, Californians will be able to have groceries and other goods delivered to them via a self-driving vehicle—with or without an onboard backup driver.

As with their passenger counterparts, robo-delivery transporters must be approved by the California DMV. Companies need to certify that all vehicles have been properly tested for autonomous use, maintain training programs for safety drivers and agree to file annual reports about their programs.

Additional requirements must be met for driverless testing. These include a communication link with a remote operator, who can take control of the vehicle if necessary.

To date, 65 companies have been approved for autonomous passenger vehicles on California roads. Waymo is the only one sanctioned for driverless operation.

Delivery vehicles promise to be early autonomy adopters because they can be easily confined to geo-fenced areas and have the potential to reduce costs (no driver paychecks). Such applications also avoid having to convince a leery public that it’s safe to ride in a driverless ride.

Automated deliveries already are underway in Arizona, Florida, Michigan and Texas. Pizzas have served as a popular test case, with Ford, General Motors, Toyota and Silicon Valley startup Nuro teaming with pie providers. One Toyota concept can even cook the pizza itself as the delivery vehicle is en route.

Ford also is working with several non-pizza partners in Miami, including local restaurants, grocery and convenience stores, dry-cleaners and retailers such as Walgreens. In other markets, the carmaker is partnering with Walmart. 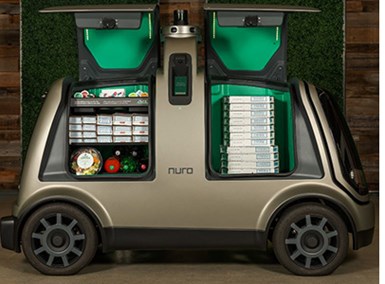 Nuro has been teaming with Kroger since late last year to deliver groceries in Scottsdale, Az. The tests involve Nuro’s driverless R1 pods, which are about half the width of a compact crossover. The 3-year-old startup also is conducting tests in Texas, and now plans to apply for certification in California. The company notes that such programs allow it to refine its technology under real-world conditions while building relationships with retail partners.