The California Air Resources Board has unanimously approved a landmark plan that will require all medium- and heavy-duty trucks sold in the state to be zero-emission vehicles (ZEVs) by 2045. 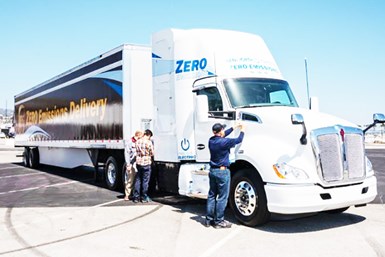 The mandate is due to start in the 2024 model year, when as much as 9% of a truck manufacturers’ sales (based on truck class) must be ZEVs. The requirements rise continuously through 2035, at which time ZEVs must account for:

CARB hails the “Advanced Clean Trucks (ACT)” initiative as a first-in-the-world rule. Environmentalists estimate the mandate will result in about 300,000 ZEV trucks on the road by 2035.

Commercial trucks are responsible for the bulk of vehicle-generated air pollution in California, even though they account for less than 7% of state’s 30 million-vehicle fleet. Class 2-8 models produce 70% of nitrogen oxide emissions and 80% of carcinogenic diesel soot, according to CARB.

Moreover, the trucks often operate in ports, railyards, distribution centers and freight corridors near low-income neighborhoods. Residents in these communities tend to be the most susceptible to health problems.

Statewide, ACT is projected to lower pollution-related premature deaths by 1,000 in the coming years. The mandate is expected to be especially helpful in metropolitan Los Angeles and the San Joaquin Valley, which are among the most polluted areas in the U.S.

CARB plans to implement a separate rule next year that will require owners of large fleets to buy some ZEVs. Under the current plan, fleets with 50 or more trucks must submit regular reports about their vehicle mix.

But the new rules likely will be contested by the U.S. Environmental Protection Agency. Last September, the agency revoked California’s longstanding right to set its own emissions standards.

California and 22 other states have filed a lawsuit challenging that ruling and the Trump administration’s subsequent rollback of federal pollution and fuel economy standards that were set in 2012.