FCA is offering all-wheel drive (AWD) on the redesigned 2021 Chrysler Pacifica that will be launched later this year. According to Tim Kuniskis, Global Head of Alfa Romeo and Head of Passenger Cars – Dodge, SRT, Chrysler and FIAT, FCA – North America, “Reaction was overwhelmingly positive when we announced that the new 2021 Chrysler Pacifica will offer AWD capability.”

This could be the very definition of pent-up demand: they haven’t offered AWD on a minivan since 2004.

So for those who want to get AWD sooner rather than later on a Pacifica, the company has opened dealer orders for the 2020 Chrysler Pacifica AWD Launch Edition. 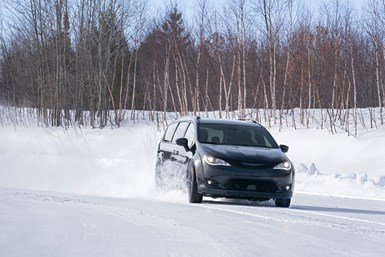 This special edition is based on the 2020 Pacifica Touring L model. It has the addition of an 8.4-inch Uconnect touchscreen radio, upgraded 18-inch wheels, Michelin Premier self-sealing tires, an S Appearance package and an all-black interior with McKinley leather seats.

How Does It Work?

There is a power transfer unit (PTU) that splits the torque from the nine-speed automatic transmission and routes it to the rear drive shaft module via a three-piece drive shaft.

The rear drive module includes an electronically controlled wet clutch to manage the torque. There is a second-generation, one-speed drive module; it contributes to low-speed drag torque reduction.

The system is automatically actuated based on sensor data that includes exterior temperature, use of windshield wipers, front wheel slip, heavy acceleration, ESC activation, abrupt steering or throttle inputs, rough roads, grades, or when starting from a stop.

The system is capable of providing 100% of the torque to the rear wheels if necessary.

Notably, the packaging of this system allows the Pacifica to offer Stow ‘n Go seating.