Silicon Valley-based ChargePoint, one of the largest operators of EV battery charging stations, is going public via a reverse merger with Switchback Energy Acquisition that values the company at $2.4 billion. 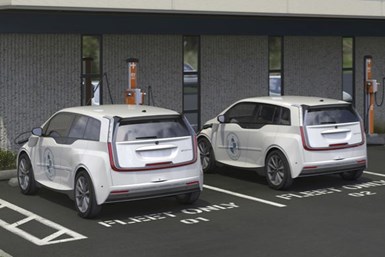 The resulting company will be called ChargePoint Holdings Inc. and listed on the New York Stock Exchange.

Due to be completed by year-end, the deal is expected to raise about $493 million. Proceeds will be used to pay down debt and expand the company’s global charging infrastructure.

The merged operations will be led by current ChargePoint CEO Pasquale Romano.

Founded in 2007, ChargePoint operates more than 115,000 charging ports—including some 2,000 DC fast chargers—in North America and Europe. The company plans to expand the network to 2.5 million ports worldwide by 2025.

The planned stock listing is another sign of the times that the EV industry is transitioning from a niche market to mainstream America.

It follows a wave of similar deals in recent months involving EV and other automotive tech startups such as Canoo, Fisker, Lordstown Motors, Nikola and Velodyne. Mergers with so-called special-purpose acquisition companies such as Switchback provide a faster and cheaper way to raise funds than a conventional IPO.

Last year ChargePoint generated sales of $147 million, up about 60% over 2018 levels. The company projects similar growth rates through 2026 as EV sales expand.

"The EV charging industry is accelerating, and it is expected that charging infrastructure investment will be $190 billion by 2030," says Switchback CEO Scott McNeill.

As part of the merger, Switchback will provide $317 million in funding to ChargePoint. Another $225 million is expected to come via the stock listing supported by investors such as Baillie Gifford (one of Tesla’s largest shareholders) and Neuberger Berman.

Prior to the Switchback deal, ChargePoint had raised more than $660 million, including $127 million earlier this year. Listed among its investors are a mix of automotive, utility and oil heavyweights such as American Electric, BMW, Chevron, Daimler, BMW and Siemens.