If Texas had an official state vehicle, there’s no doubt it would be a pickup truck. A full-size American model. That runs on gasoline, or maybe diesel fuel.

Kandi Technologies Group is about to find out. 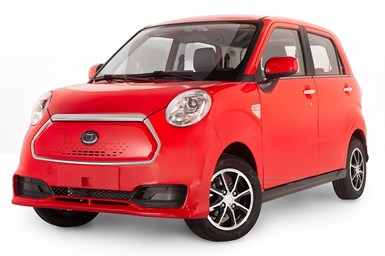 The Chinese company, which is affiliated with Geely Automobile, will begin selling its K27 and K23 models later this year in Texas. Early last year, Kandi received approval from the National Highway Transportation Administration to import the vehicles from China.

The cars will be distributed through SC Autosports, which Kandi acquired in 2018. Sales initially will be limited to the Dallas-Fort Worth area.

A virtual launch event is scheduled for Aug. 18, at which time customers can put down a $100 purchase reservation. Deliveries are due to start in the fourth quarter.

The oddly shaped K27 hatchback has been described as a mash-up of a Mini Cooper and a Smart car. 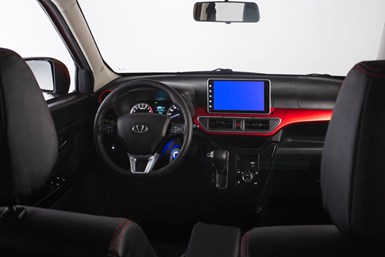 Powered by a small electric motor and a 17.69-kWh battery, the K27 has a driving range of 100 miles per charge, according to Kandi. It takes seven hours to fully recharge the battery via a 250-volt system.

The subcompact four-seater sits on a 97-inch wheelbase and stretches to 136 inches from bumper to bumper. Top speed is limited to 63 mph.

The selling point clearly is the car’s price.

The K27 and K23, which were designed by Geely and marketed under the carmaker’s Gleagle brand in China, would be the first Chinese models sold in the U.S. (Geely recently increased its stake in the 7-year-old joint venture it operates with Kandi in China to 78%.)

Limiting sales to Texas, where Kandi America and SC Autosports are based, would allow the company to start on a relatively small scale before expanding to other U.S. markets.

You might be surprised to learn there already are 18,000 Teslas on the road in the Lone Star state.

And with several electric trucks in the works—including models from Ford, General Motors, Bollinger, Nikola, Rivian and Tesla—Texas could soon become a popular destination for the green technology.

Still, Kandi is going to have its work cut out for it.