General Motors Co.’s Chevrolet brand plans to introduce an all-electric crossover vehicle based on the Bolt platform later this year in China. 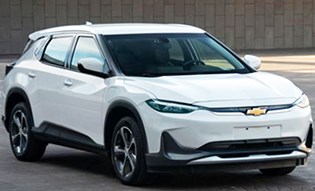 The carmaker released images of the vehicle, which will be called the Menlo, this week as part of its formal declaration of intent issued to the Chinese Ministry of Industry and Information Technology. The Menlo will be publicly unveiled at next month’s Chengdu auto show.

GM will produce the crossover through its joint venture with SAIC Motor Corp. SAIC-GM also builds the Buick Velite 6, a sporty crossover which is available as a plug-in hybrid and EV.

The Menlo is expected to be wider and considerably longer than the Bolt. The electric powertrain will produce 174 hp and propel the vehicle to a top speed of 93 mph, according to Chinese media reports.

In addition to China, the Menlo could eventually be sold in other markets. Analysts note that GM previously has indicated it would offer a Bolt-based crossover in the U.S. market.