Tesla’s Model 3 was the top-selling vehicle in Norway last year.

In 2018, it was the Nissan Leaf. Other popular vehicles in the country include the Audi e-tron, Jaguar I-Pace, BMW i3 and Volkswagen eGolf.

The common denominator? They’re all electric vehicles, of course.

This shouldn’t come as a surprise. For the last several years, EVs have accounted for more than half of Norway’s new vehicle sales. In 2019, they had a 56% market share. Plug-in hybrids grabbed another 15%, making Norway the world leader in transitioning to electrified vehicles—thanks, in large part, to hefty incentives.

BYD Aims to Join the Party

BYD, which is partially backed by billionaire investor Warren Buffett, already has made inroads in Europe and North America with its range of electric buses. But it and other Chinese OEMs have had little, if any, success in expanding westward with passenger cars and trucks.

First up is the Tang EV600 SUV/crossover vehicle, which BYD plans to begin exporting to Norway later this year. 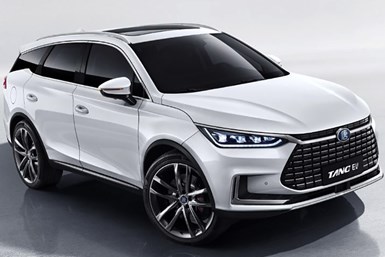 Launched last year in China, the EV is fitted with an 82.8-KWh battery and a pair of electric motors. The system generates 483 hp and provides a range of 373 miles on the NEDC test cycle, according to the carmaker. BYD says the Tang can be recharged in about 30 minutes.

The EV600 is the second iteration of the Tang. The first-generation model, launched in 2015, was a plug-in hybrid.

In addition to the Tang, BYD plans to launch several electric-powered commercial vehicles in Europe later this year. The rollout is expected to include a panel van, yard tractor and a pair of rugged work trucks.

Meanwhile, the Tang will serve as a test case for BYD’s European electric car ambitions.

“We will closely evaluate how the market performs but, in the longer term, it is our aim to expand passenger car sales beyond Norway,” says Isbrand Ho, who heads BYD’s European operations. For now, he’s hopeful that the Tang’s range, design, practicality and value can win over Norwegian buyers.

Proving itself in Norway’s ultra-competitive EV market could go a long way in helping BYD expand beyond China.