Body temperature checks and face masks are still the norm. So is regular plantwide disinfection. But Reuters says its visits to six car and components factories found many employees, especially in final assembly areas, working nearly shoulder to shoulder. 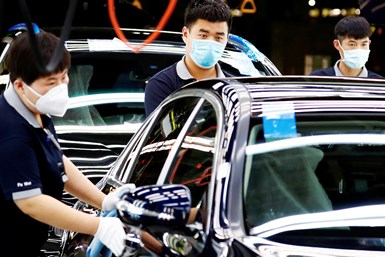 China’s social distancing norm has been one meter, about half the six feet advocated in the U.S. Reuters says the same rule continues to apply among Chinese manufacturers outside production areas where closer working conditions are necessary for the sake of productivity.

All plants visited by Reuters claim they haven’t detected a new infection since February. That’s when the country began reopening some of its car plants. Geely Auto Group tells Reuters its factory in Yuyao returned to its full operating capacity in early March.

Last month, overall vehicle production in China rose 2% above output in April 2019, marking the first year-on-year gain since COVID-19 appeared in the country at the end of December. Factory wholesales to dealers grew 4%, ending a slide that began in June 2018, according to the China Assn. of Automobile Manufacturers.

China’s auto industry was first to be affected by the coronavirus epidemic and first to emerge from it. So carmakers in Europe and the U.S. have been closely tracking progress there, including the experiences of their own factories in China, for clues about what to expect as they open their home plants.

So far, the indicators are encouraging. If what has happened in China can be duplicated in the U.S., then the American auto industry could return to near-normal output by mid-August.