Neolix, a 2-year-old startup based in Beijing, is putting its tiny self-driving vans to use during the coronavirus outbreak. 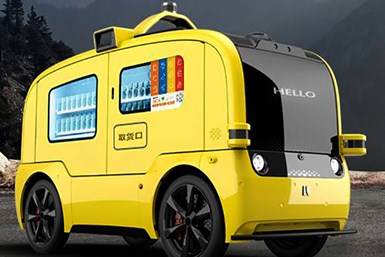 The company has deployed 18 of the autonomous vehicles to deliver medical supplies and food to hospitals in Wuhan, where the virus originated in December.

The driverless models allow deliveries to be made in high-risk areas without subjecting people to possible exposure. They also circumvent labor shortages caused by quarantines and travel restrictions, Neolix notes.

In addition, the vans have been used to disinfect streets in Beijing, Guangzhou, Shanghai and Shenzhen.

More on the Way

More than 220 of the self-driving pods, which Neolix offers in four variants, have been delivered since production began last May. The company aims to produce 1,000 by the end of the year, which CEO Yu Enyuan says would allow it to break even.

The high-profile coronavirus applications help the public become more familiar and comfortable with the technology, Enyuan tells Bloomberg News. “People realize that such vehicles can get things done when it is risky for a human being to do so.”

New incentives also are spurring growth. Enyuan says local authorities are offering to subsidize as much as 60% of the cost for customers to purchase and operate driverless vans in their jurisdictions as China slowly resumes manufacturing operations.

Honda began ramping up production at its plant in Wuhan last week and suppliers throughout the rest of the Hubei province are relaunching output in “an orderly manner,” according to government officials.

The company’s manufacturing plant in Changzhou has annual capacity of 10,000 vehicles. Customers include tech giants Alibaba and Baidu, retail platforms JD.com and Meituan-Dianping, along with several local governments. In addition to China, Neolix has orders from Saudi Arabia and other Middle East and African countries.

Last week, Neolix completed its second round of funding in which it raised 200 million yuan ($30 million). The company now has 160 employees.