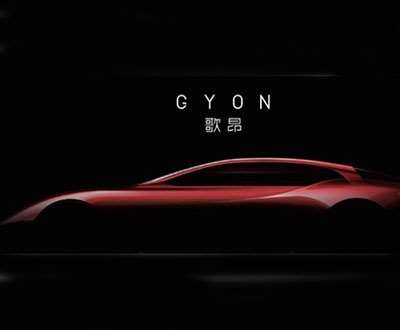 Gyon, which stands for “grow your own niche,” plans to offer a range of electric sedans, crossovers and SUVs, starting with an unspecified model within the next two years. The company plans to open two production facilities near its headquarters in Chengdu, China.

But the company initially may use a current FAW facility if the Gyon plant isn’t finished in time, Joe Chao, co-founder and president, tells Automotive News. Gyon detailed its plans this week at a signing ceremony with development partner Gaffoglio Family Metalcrafters Inc. (GFMI) in Los Angeles.

GFMI, a Fountain Valley, Calif.-based fabricator, will design and build a “high-end” concept car that Gyon now plans to unveil in 2019. Gyon released a teaser sketch of the vehicle last month.

The first production EVs will be A- and B-segment models starting at about 100,000 yuan ($14,700), company officials tell AN. The EV’s will have a driving range of about 370 miles and be equipped with a battery that can be fully recharged in 15 minutes, according to the carmaker.