Rent the tiny car by the minute, month or buy it outright…for $6,600
#Citroen #Ford #Renault

The new Citroen Ami electric city car could be the future of urban mobility in Europe. It’s small, versatile, efficient, and it can be purchased for as little as €6,000 ($6,600)—or rented by the minute.

The carmaker is introducing the Ami (French for friend) this summer, relaunching the popular nameplate after a 42-year hiatus. Launched in 1961, the original Ami 6/8 sold more than 1.8 million units during its 17-year run. 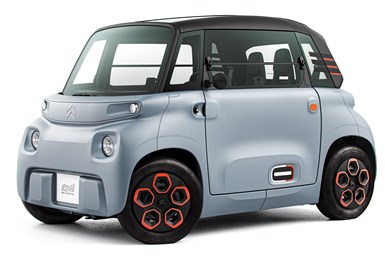 Based on last year’s Ami One concept, the quirky new 2-seater is classified as a quadricycle. That means it can be driven without a license by operators as young as 14 in France and 16 elsewhere in Europe.

Usage is restricted to low-speed roads—the car has a top speed of 28 mph.

New Twist on an Old Concept

Quadricycles have been around since the early days of the auto industry. In fact, the first car Henry Ford produced was the Ford Quadricycle in 1896.

Modern equivalents, such as the Ami, Renault Twizy and SEAT Minimo are designed to reduce congestion in crowded city streets.

Measuring just 95 inches long, the Ami is even shorter than its Renault and SEAT counterparts. It also has a 283-inch turning circle, which Citroen notes will aid in parking maneuvers. Design features include a panoramic glass roof and a rear-hinged driver’s side door to increase accessibility.

The car’s 5.5-kWh battery provides a 47-mile driving range on the European cycle. It can be fully recharged in three hours from a 220-volt household outlet.

Perhaps the most interesting aspect of the Ami is Citroen’s flexible marketing plan.

Options include booking the vehicle through Citroen parent PSA Group’s Free2Move car-sharing program. Prices start at just €0.26 (29 cents) per minute, which the carmaker notes is less than some moped rentals.

Buyers can order the vehicle online and have it delivered directly to them or pick it up at a Citroen outlet.

There are no plans to offer the Ami in the U.S. But it could provide a valuable lesson on emerging micromobility services, including new ownership models to help make EVs more viable.