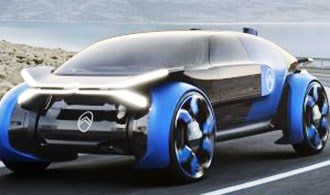 Citroen collaborated with Goodyear Tire & Rubber Co. on the 30-inch-diameter tires for the concept car, which was unveiled in May to commemorate the carmaker’s 100th anniversary. The tires feature a narrow contact patch and seamlessly integrated rims, according to the partners.

CEO Linda Jackson tells reporters that such tires could be packaged in a skateboard-type chassis for electric vehicles to enable an elevated, SUV-like seating position without requiring a larger body.

The big tires also would make it easier to install in-wheel electric motors, and the narrow tread would boost aerodynamics. But media reports speculate that the tiny sidewalls could make ride harshness an issue.