PSA Group’s Citroen unit took the wraps off its 19_19 Concept car this week in commemoration of the brand’s 100th anniversary.
#Citroen #HP #PSAPeugeotCitroen 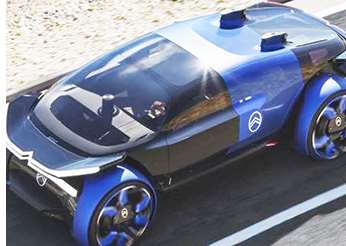 Designed from the ground up as a fully electric vehicle with semi-autonomous driving capabilities, the sedan is built on a skateboard-style chassis with giant 30-inch wheels pushed to the corners. The streamlined body resembles an airplane fuselage.

A transparent double hood channels air toward the windshield to enhance aerodynamics. The short upper hood serves as a spoiler and houses an LED lightbar. The underbody tapers off at the rear to further improve airflow, according to the carmaker.

The front doors have a black LED panel that can display messages to pedestrians and other vehicles. Other features include rear-hinged rear doors and Citroen’s active suspension technology.

Inside, the 19_19 sports contoured seats. The front passenger seat is designed to replicate a chaise lounge chair, while the sofa-like rear seats can recline into the cargo area. A flexible webbing similar to that of a hammock replaces the traditional headrests. An augmented reality head-up display provides information to the driver.

Power comes from a pair of electric motors that generate a combined 460 hp and 590 lb-ft of torque. The 100-kWh battery provides a 500-mile driving range and can be replenished to 80% capacity within 20 minutes, according to Citroen.

The vehicle is being displayed at this week’s VivaTech conference in Paris.