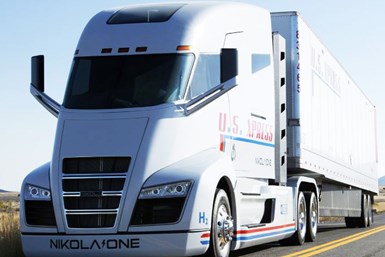 The deal will give CNH a stake of nearly 8% in Phoenix-based Nikola, which aims to launch three fuel cell-powered Class 8 trucks by the end of 2022. The investment consists of $100 million in cash and $150 million in engineering and manufacturing support from CNH’s Iveco and FPT powertrain units.

Nikola, which previously raised more than $265 million, has an estimated pre-money valuation of $3 billion. Robert Bosch GmbH and South Korea’s Hanwha Group each have invested more than $100 million in Nikola. Nikola CEO and founder Trevor Milton is the company’s largest shareholder.

Nikola plans to use the new funds to complete development of its trucks, build a factory in Arizona and open a network of hydrogen fuel stations. The company says it has a combined 14,000 pre-orders for the Nikola One sleeper (pictured), Two day cab and Tre cab-over-engine models.

Nikola also plans to offer battery-electric variants of the trucks. The Tre is designed specifically for Europe.

The joint venture with CNH will focus on the European rollout of the fuel cell- and battery-powered trucks, with Nikola leveraging Iveco’s sales and service operations. The companies also will work to implement Iveco's “S-Way” technology—a mix of safety, connectivity, aerodynamic and convenience features—into the Tre EV variant.

Earlier this week CNH confirmed reports that it plans to split the on-highway (Iveco and FPT) and off-highway (Case New Holland) units into separate businesses by early 2021.