Autonomous shuttle service has begun for residents in the Linden neighborhood of Columbus, Ohio.

The one-year pilot program, which follows a similar one that ended last September in downtown Columbus, is said to be the first in the U.S. for a self-driving vehicle operating seven days per week in a residential area.

Both are part of the $40 million grant Columbus received as the winner of the U.S. Dept. of Transportation’s 2016 Smart City Challenge.

The so-called Linden LEAP (Linden Empowers All People) program initially will employ two 12-passenger vans provided by EasyMile, a Toulouse, France-based company that claims to be the world leader in self-driving shuttles. A third van will be added next month. 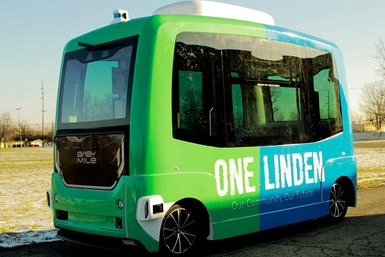 The wheelchair-accessible shuttles will operate daily from 6 a.m. to 8 p.m. (excluding two 90-minute breaks when school is starting and ending on week days). They will make four stops along a 2.9-mile route, traveling at a top speed of 25 mph.

The service is free to riders. An onboard “customer service ambassador” will assist them and can take control of the vehicle if necessary.

DOT awarded Columbus the grant over more than 75 other midsize cities in part because of the Ohio capital’s holistic vision for how technology can help improve mobility and access to opportunities for all residents.

Linden, which is cut off from the rest of Columbus by a highway and train tracks, is a low-income community with a high proportion of car-less households and unreliable transportation to employers and health services.

The new shuttles promise to reduce such barriers by improving access to employment, education, health- and childcare, recreation and community events. This includes first-mile/last-mile service to other public transportation, such as the Central Ohio bus line.

In addition to LEAP, Linden is building mobility-as-a-service (MaaS) kiosks that are designed to help users a single platform on which to coordinate the schedules and payment of various modes of transportation. The city also is testing electric and connected vehicle fleets.

Moreover, Columbus and other Smart City participants are sharing the results of their efforts with city planners across the country to help create best practices and reduce development costs. The goal is to help everyone leap forward.