Such capabilities are key to the server-based approach that Conti says will be necessary to manage next-generation vehicles as more features—autonomous, connected and electrification—are added. Eventually, this will require consolidating dozens of electronic control units (ECUs) into a handful of ultra-powerful domain controllers (possibly as few as 2 or 3) responsible for specific groupings, such as powertrain, infotainment and body/chassis.

Conti hails the architecture as a “milestone in the digital transformation” of a vehicle. One benefit is to separate software development from the corresponding hardware to enable speedier (smartphone-like) updates.

But getting the job done is a huge and complex undertaking. Conti’s new system, for example, manages: 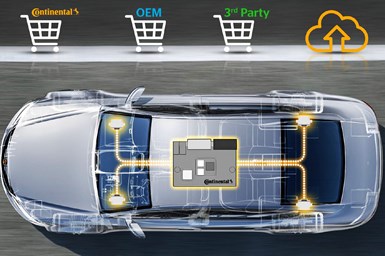 Conti says the centralized computing power is provided by a high-performance system-on-chip over a fast-bus architecture such as an automotive Ethernet. Different operating systems (Adaptive Autosar, Android, Java VM) can run on the same hardware. Other benefits: predictive maintenance and enhanced cybersecurity.

Conti’s new system debuts this year in Volkswagen’s new ID.3 electric hatchback in Europe and will be used for subsequent ID models.

VW plans to consolidate the number of electronics architectures used across its various brands from eight today to a single platform. The number of ECUs will be slashed from about 70 modules (with software from 200 vendors) to less than five.