Jeff Klei, who has been president of Continental’s North America operations since 2008, is retiring, effective April 1.

He will be succeeded by Bob Lee, who has led the supplier’s Korean operations since joining the company in 2014.

Klei rose to the occasion at Conti, helping the company navigate through the 2008-2009 recession. In recent years, he’s been a fierce advocate for improving automotive safety through the use of advanced technologies—including self-driving vehicle and connectivity technologies—and helping consumers understand and interact with such systems. 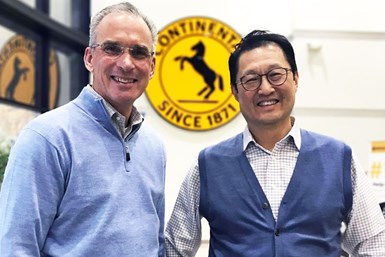 Klei also has been a strong proponent of partnerships—with carmakers, other suppliers and the government. In a 2017 congressional testimony, he called for greater collaboration and industry standards to help foster innovation, enhance mobility and create a safer driving environment with a goal of zero accidents, injuries and fatalities.

A mechanical engineer by trade, Klei began his career at ITT Automotive in 1989. He joined Continental Teves as the head of North American sales and marketing when Conti acquired ITT Automotive’s brake and chassis unit in 1998.

Just like Klei, Lee’s tenure as president of Conti North America begins under tumultuous conditions as the world fights the coronavirus. He also will be tasked with building external relationships as traditional suppliers face increasing competition from tech companies and the industry transforms into broader mobility providers.

Lee brings a different skill set to the job with a bachelor’s degree in economics and sociology from Brown University and an MBA from MIT’s Sloan School of Management. He started his career as a consultant with A.T. Kearney and Boston Consulting, then went on to launch a computer software company and worked for a venture capital company.

In his new position, Lee will report to Samir Salman, CEO of Continental North America.