Continental reportedly has decided its turbocharger business is no longer “strategically important” and is looking for a buyer.

The company has been on a restructuring binge since 2018 to reposition itself to “actively shape the mobility of the future.” It is centralizing its automotive R&D and focusing heavily upon electrification, connectivity and automated driving.

Conti also says future business decisions will be guided in large part by the desire to be among the top three suppliers in market segments where it competes. How? By targeting high-growth markets with a mix of established and pioneering technologies.

But turbochargers may no longer fit those criteria well. The demand for turbos has been strong for more than a decade. Carmakers have increasingly used the devices to squeeze additional power out of smaller and more efficient diesels and gasoline engines.

Bloomberg notes that other suppliers—notably BorgWarner and Garrett Motion—predict the ratio of new cars equipped with turbos will continue to climb from 51% in 2019 to 56% by 2023. 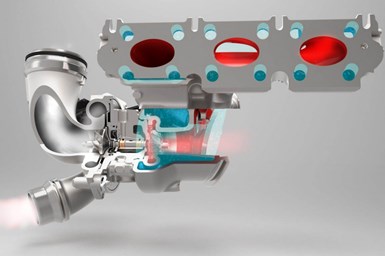 Not for long, however. Analysts generally agree that hybrids are an interim step on the way to fully electric powertrains. How long it will take to get there is open for debate, but the eventual outcome is the same.

Conti isn’t the only turbocharger supplier struggling with scale. Two years ago Robert Bosch and Mahle sold their joint venture turbo company—BTMS (Bosch Mahle Turbo Systems)—to Chinese investors. The partners said that, despite growing demand, their BTMS (Bosch Mahle Turbo Systems) venture was too small to compete with the likes of BorgWarner and Honeywell International.

Last month, Swiss turbo maker Garrett filed for bankruptcy protection after swinging to a loss in the second quarter. The company, spun off by Honeywell in 2018, blamed a second-quarter loss on the COVID-19 pandemic and liabilities inherited from Honeywell.

Garrett is now pursuing a $2.6 billion bid from New York City-based private equity firm KPS Capital Partners that would enable it to emerge from bankruptcy early next year.

Conti, like other second-tier turbo suppliers, recognizes that it will only get tougher to compete with bigger companies in a market poised for shrinkage.