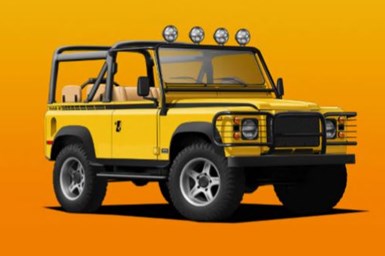 More than two decades later, that same vehicle—meaning a 1992-97 North American Specification (NAS) Defender rather than the all-new model that was introduced last year—now starts at $185,000.

Except it’s not exactly the same Defender. The U.S. operations of Twisted Automotive, a 20-year-old British tuning company that specializes in Land Rovers, is retrofitting the older models with an electric drivetrain and adding some modern amenities and other upgrades.

“As the world moves steadily toward mass electrification, the Californian market has been missing a uniquely stylish electric 4x4 option," asserts Bruce Riggs, who heads Virginia-based Twisted North America. "The Twisted NAS-E is the ultimate expression of the American coastal lifestyle.”

And by niche, we’re talking hypercar-like quantities. Twisted initially aims to make just 30 of the zero-emission Defenders. Buyers can choose among three colors (Malibu Yellow, Yosemite Green and Tahloe Blue), which the company says were inspired by California landscapes.

Some carmakers have taken a similar approach with their classic models. Volkswagen is working with German electrification specialist eClassics to retrofit electric drivetrains into its Type 1 Beetle and its iconic microbus. Aston Martin is doing the same with some of its cars.

Twisted’s $185,000 Defender NAS-E is powered by a BorgWarner electric motor that generates 214 hp and 280 lb ft of torque. Despite the absence of a transmission, drivers still will be able to select gears manually during off-road maneuvers via a 2-speed step-down transfer case.

The drivetrain is paired with a 60-kWh battery that provides an estimated driving range of 200 miles.

For another $25,000, buyers can upgrade to the NAS-E Plus. Power is increased to 320 hp and 339 lb-ft of torque. Other goodies include a brush bar, side steps, rollbar spotlights, black side sills and an exclusive body stripe decal.

It takes about nine months to adapt the Defenders to electric power and complete the conversion.

Twisted also is expected to sell the NAS-E in other markets. The company reportedly spent $10 million to acquire 240 of the base 1990-era Defenders, which works out to about $41,700 per vehicle (some classic NAS models have fetched nearly $200,000 at auction).