Here’s our latest update on auto industry activities related to the COVID-19 pandemic:

Daimler will halt Mercedes-Benz production during the week of May 18 at its factory in Vance, Ala., because of a shortage of parts from suppliers in Mexico, Bloomberg News says. The factory had opened in late April after a five-week shutdown because of the coronavirus pandemic.

Ford is resuming engine production on May 18 at factories in Valencia, Spain, and Bridgend and Dagenham, U.K. The three facilities are the last of Ford’s European manufacturing operations to end their lockdown. 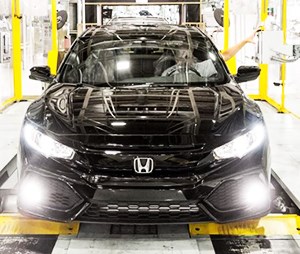 Honda will gradually resume operations at its Civic small-car plant in Swindon, England, after idling the facility in mid-March. Bloomberg News cites an internal memo that says Honda aims to achieve daily output of 450 cars by June 15. The factory is scheduled to close permanently in 2021.

Nissan plans to relaunch assembly work at its huge plant in Sunderland, England, in early June. The facility has been locked down since March 17.

PSA and Toyota won’t resume minicar assembly at their joint-venture plant in Kolin, Czech Republic, until May 25. The facility had been scheduled to reopen on May 18.

Toyota’s factories in Japan will cut output by 122,000 in June because the pandemic has dried up retail car sales. All 15 factories will close completely for four days, and as many as 10 production lines will stop for as much as a week.

Vauxhall will resume van production in Luton, U.K., on May 18 at roughly one-third of capacity. Most vehicles will be exported, since British showrooms won’t reopen until June.

On May 13 Britain began allowing dealers to offer “contactless” sales. Customers may pick up their vehicles in person at dealerships after purchasing them online. Carmakers say the step is critical in justifying reopening their U.K. assembly plants.

Ford says the debut of its restyled F-150 pickup truck and all-new Mustang Mach-E electric crossover and Bronco SUV will be delayed two months because of pandemic-related plant closures. The F-Series truck and electric Mustang are due sometime in the second half of 2020. The Bronco will debut early next year.

Renault is likely to drop its slow-selling Talisman large sedan and Espace and Scenic minivan from future product planning in a move to cut costs and simplify its lineup, sources tell Reuters. The company currently makes at least 45 models.

Fiat Chrysler Automobiles reportedly is trying to line up $6.8 billion (€6.3 billion) in loans backed by the Italian government to weather the current sales slump. The company burned through $5.5 billion in January-April when the pandemic shuttered plants and destroyed sales demand.

McLaren seeks to sell $335 million worth of bonds by putting up its headquarters and collection of historic race cars as collateral.

Nissan hopes to raise as much as $4.7 billion (500 billion yen) in bond sales over two years to help carry it through the virus pandemic and its own restructuring plan.