Here is our latest report on auto industry activities and developments related to the COVID-19 pandemic:

Bosch says it has been approved to reopen a dozen factories in Mexico. The company will begin opening several facilities at 25% of normal capacity during the week of June 1. 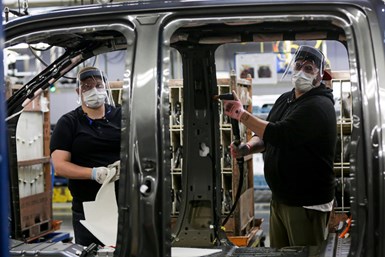 Ford briefly has suspended production at three plants because a worker tested positive for COVID-19. The company idled facilities in Chicago and Dearborn, Mich., during the week of May 18. Ford also suspended van assembly operations on May 26 at its truck factory in Kansas City, Mo.

General Motors says it will operate three shifts at its North American pickup truck plants, beginning June 1. At the same time, two other SUV/crossover plants will move from one to two shifts. Another five facilities will continue for now on one shift.

Many North American carmakers will scrap their usual summer breaks this year to so they can replenish dealer inventories. BMW, Honda and Mercedes-Benz already have canceled three days of scheduled downtime in late June. Detroit’s Big Three carmakers will decide in the first week of June whether to follow suit.

The New York Auto Show has been canceled until April 2-11, 2021. The event, originally scheduled for mid-April, had been postponed to Aug. 28-Sept. 6. But last month the 120-year-old show’s usual venue, the Javits Convention Center, was turned into a field hospital for COVID-19 patients. The facility remains on indefinite standby status.

The fate of the 2021 Geneva Auto Show is unclear. This year’s March event was canceled four days before its opening. Now the century-old organizing foundation rejected a $17 million bailout loan from the Geneva State Council requiring that complete control of the show be turned over to the event management service of the Palexpo convention center.

New-car sales in India are likely to drop 25% to a 10-year low in the current fiscal year, The Economic Times says. The primary reason: Consumer hesitancy to finance a big purchase amid surging cases of COVID-19, pay cuts and job layoffs.

Uber says it will expand an hourly rate option for its ride-hailing service in a dozen U.S. cities, starting June 2. The plan enables customers wary of COVID-19 to retain the same driver—at $50 per hour—for trips to and from a grocery store, for example, rather than requiring them to hail another car and new driver to get home again.

Europe’s carmakers are grumbling about the lack of detail in the European Union’s $833 billion program to reboot the region’s economy. The package involves $555 billion in grants and $278 billion in loans. But there are no specific about the portion earmarked for carmakers, or how it would be applied. The package requires approval of the EU’s 27 member nations, a highly political process that will take months.

Williams Grand Prix Holdings has put part or all of its Formula One team up for sale. The company cites the financial strain of F1’s cancellation of at least its first 10 races this year because of the coronavirus. Williams, which ranked 10th out of 10 teams in last year’s F1 season, lost $14 million in 2019.