Here is today’s summary of news about the global auto industry’s response to the coronavirus pandemic:

France has extended its nationwide lockdown to April 15.

Fiat Chrysler Automobiles is ready to reopen three plants in Italy as soon as Italy’s government allows it. Union officials say that could be on April 14.

Ferrari now hopes to reopen its assembly plants in Italy on April 14.

Ford delays plans indefinitely for a return to production in North America. The company had hoped to reopen several truck plants in April.

Nissan is extending its plant shutdowns in the U.S. through “late April.”

Renault assembly operations are suspended worldwide except in China and South Korea.

Subaru is extending shutdowns at both of its assembly plants because of supply issues and low sales activity. Production will resume on April 20 in the U.S. and May 11 in Japan.

Toyota says it won’t resume production in Europe until at least April 20, or “as soon as conditions permit.”

Volkswagen plans to reopen its assembly plant in Chattanooga, Tenn., on April 12. The company has extended its plant closures in Germany to April 19. 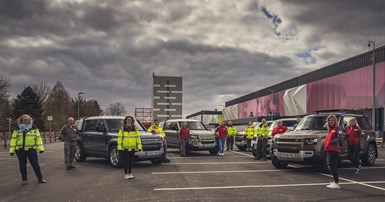 Jaguar Land Rover turns over press cars to a worthy cause.  (Image: JLR)

Jaguar Land Rover is raiding its press pool of 160-plus loaner cars and lending them to the Red Cross and local emergency services. The vehicles will be deployed to deliver food and medicine to elderly and other vulnerable people in Australia, England, South Africa, France and Spain.

Mercedes-Benz India and local authorities in Pune are setting up and equipping a temporary hospital with 1,500 isolation beds to handle coronavirus patients. The company also is matching voluntary contributions by its employees of a day’s wages for a COVID-19 relief fund.

Volkswagen and Faurecia have teamed up to deliver 70,000 masks and 5,000 protective gowns to hospitals in New York City. Capacity at a repurposed Faurecia plant in Mexico has since jumped to 250,000 masks and 50,000 gowns per week.