No steering wheel, no foot pedals, no driver, no problem
#Chevrolet #GeneralMotors #Honda

Cruise, the autonomous vehicle unit of General Motors, has unveiled its first vehicle—the Origin electric shuttle—that it plans to use as a robo-taxi.

The boxy Level 5 driverless vehicle has no steering wheel or foot pedal (accelerator/brake) controls. Everything is operated autonomously—without a backup safety driver.

GM partnered with Honda, which is investing more than $2 billion into Cruise, on the Origin. The Japanese automaker provided engineering and manufacturing support.

Details are scarce, but here’s what we know so far. 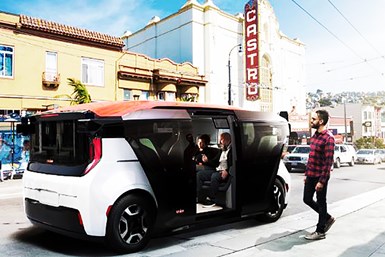 The Origin is about the size of a midsize car but much more spacious, according to Cruise. It has wide sliding doors for easy access and can accommodate at least four people with seats facing each other.

A multi-sensor suite is used to determine the vehicle’s location and surrounding objects. It isn’t clear if lidar is part of the array.

Cruise says the Origin can be mass produced. The modular design also can be quickly modified for different applications as needed.

Cruise CEO Dan Ammann says the company plans to use the Origin to launch a new ride-hailing service that will compete directly against Uber and Lyft. Testing will begin on private campuses in the “near future.”

Cruise will "own the entire experience,” including the smartphone app and customer service, according to Ammann, who stresses the importance of reliability and consistency.

If at First You Don’t Succeed

Cruise had planned to launch a driverless taxi service last year with a modified version of the Chevrolet Bolt electric car.

In July, however, the company announced it was delaying the introduction because additional safety validation was needed. The company now hopes to launch the service with paying customers in San Francisco later this year.

Still up in the air is whether driverless vehicles are legal. In early 2018, Cruise petitioned for exemptions from the Federal Motor Vehicle Safety Standards that would allow Cruise to test vehicles without manual controls. It still hasn’t heard back yet.

Cruise sees several significant benefits to autonomous vehicles such as the Origin. Here’s how Ammann described them in a blog post last month:

"It is our mission to improve safety by removing the human driver, reduce emissions by being all-electric, and reduce congestion through making shared rides more compelling by providing an awesome experience at a radically lower cost.

"Only then will we truly move beyond the car to the transportation system that we deserve—one that is safer, more affordable, and better for us, for our cities, and for our planet."