Daimler says the big EQS electric sedan it introduces next year will be able to outdrive the champ, a Tesla Models S, by more than 50 miles per charge.

The EQS is an S-Class large luxury sedan that CEO Ola Kallenius claims will match its sibling in safety, comfort and luxurious appointments. 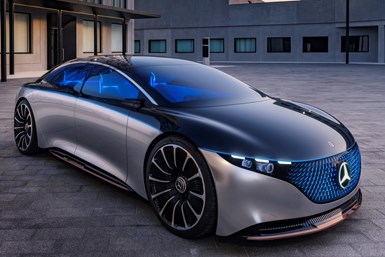 The EQC, inspired by the piston-powered GLC, uses the same rear-drive chassis that underpins many piston-powered models. The upcoming EQS will be the first to ride on the company’s new, EV-specific platform, which promises better component packaging and overall efficiency.

The same architecture eventually will carry 10 all-electric models, starting in 2022 with the EQE high-performance electric sedan. The output of the EQE’s two-motor, all-wheel-drive powertrain reportedly will surpass the EQC’s 408 hp and 564 lb-ft of torque.

Other upcoming electric models to share the new chassis will include a compact coupe (EQA), compact crossover (EQB) and minivan (EQV).

Demand has been tepid for Daimler’s all-electric models to date, all of which use modified versions of chassis designed for piston-based powertrains.

The EQS will be Daimler’s first true test to compete one-on-one with Tesla, the market’s current leader in high-end electric car.