The two companies will collaborate initially on developing a Class 8 truck chassis, based on Daimler’s existing Freightliner Cascadia platform, that can easily accommodate self-driving sensors and cameras.

Waymo CEO John Krafcik says a second major goal will be to develop built-in redundancies to ensure the safety of Level 4 self-driving systems.

“These components do not exist today” for heavy commercial trucks, Krafcik points out. He cautions that developing and vetting the devices and subsystems could take several years.

Waymo has been testing self-driving heavy trucks for three years. That’s about how long Daimler Trucks has been at it too, with everything from semi-autonomous highway trucks to driverless snow plows for airports.

Daimler already works with Torc Robotics, a Blacksburg, Va.-based developer of Level 4 self-driving technology. The truckmaker acquired a controlling stake in Torc last year and integrated the company into the Autonomous Technology Group it set up two months later. 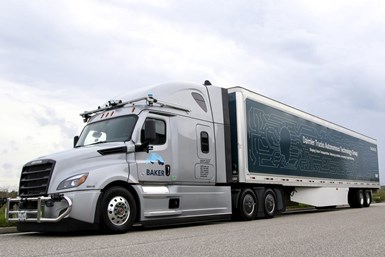 The Daimler and Torc announced in October that they would begin testing a second-generation Level 4 control system on public roads in New Mexico early next year.

The tests will use Freightliner Cascadia Class 8 test trucks that have been fitted with redundant, safety-critical components.

Adding Waymo to its development program will give Daimler Truck’s future fleet customers a choice of autonomous-driving options.

Waymo says its autonomy systems have racked up more than 20 million miles of test miles on U.S. roads—and another 15 million miles in simulation—to date.