Last week the company formed an alliance with Waymo on robo-truck development. Now Daimler Truck and its Torc Robotics affiliate are partnering with lidar startup Luminar Technologies to expand that effort. 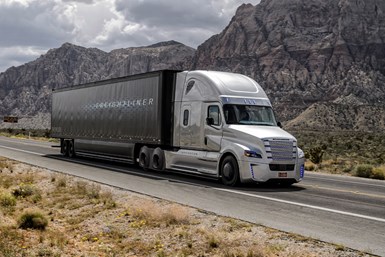 Daimler says its Freightliner robo-truck is the first to be licensed in the U.S. (Image: Daimler)

Daimler Truck has taken an undisclosed minority stake in Luminar to cement the alliance.

Luminar, meanwhile, is preparing to launch an initial public offering through a reverse merger with Los Angeles-based Gores Metropoulos. The deal values the 8-year-old startup at $3.4 billion.

“Our common goal,” says Peter Schmidt, who heads Daimler Truck’s Autonomy Technology Group, “is to enable safe deployment of highly automated trucks and shape the future of the trucking and logistics industry at large.”

The partners are convinced they can deploy autonomous vehicles for highway use well before the technology is ready for the navigational intricacies of short-haul urban delivery work.

Luminar has been working with dozens of vehicle manufacturers and suppliers on its “Iris” short-wave lidar technology, which it says delivers 10 times the range and 50 times the resolution of conventional lidars.

Volvo, a major investor in Luminar, plans to begin using the company’s devices in advanced driving assist systems for its passenger cars in 2022.