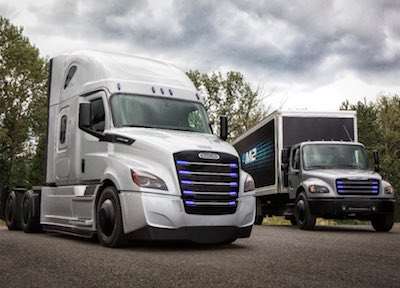 The company’s Freightliner eCascadia heavy-duty tractor will have an 80,000-lb gross combined weight and a range of 250 miles (402 km) per charge. Intended for regional freight service, the truck offers 730 peak horsepower and a 550-kWh battery that can be charged to 80% of capacity in 90 minutes.

The Freightliner eM2 106 is a medium-duty electric truck that can cover 230 miles (370 miles) per charge. The truck was developed for local food and beverage deliveries and “final mile” services, according to Daimler Trucks. The eM2 comes with a 325-kWh battery that can charge to 80% of capacity in 60 minutes.

The company plans to deliver about 30 of the two models later this year for evaluation by customers. Large-scale production is set to begin three years from now.

The two new EVs join Daimler’s eActros electric truck, the first 10 of which are being distributed to customers now. The eActros, which can travel 125 miles (200 km) per charge, is being offered in 18- and 25-metric ton versions. Daimler says serial production is likely to begin in 2021.