Gale Halderman isn’t a household name. But it should be.

Halderman is one of the designers of the most iconic and long-lasting nameplates in automotive history: the Ford Mustang.

He died from liver cancer on Wednesday at the age of 87.

In 1961, Halderman was working on a design study project of a small electric car concept for Ford’s Advanced Design Studio.

When Lee Iacocca, who at the time headed the company’s Ford Div., and product planning engineer Hal Sperlich saw clay models of the Astrion/Firefly concepts, it prompted the executives to revive their plans to develop a compact sporty car, Halderman recalled in a lengthy 2002 interview with Collectible Automobile.

After several concepts failed to hit the mark, Ford launched a contest among its designers in September 1962. The mandate was to create a sporty 4-seater that was no more than 180 inches long, weighed less than 2,500 lbs and could be sold for under $2,500.

Halderman’s sketch, which featured a long hood and sleek body, won the contest. The design was nicknamed “Cougar” for its stylized wild big cat that adorned the middle of the grille.

Much of the basic design made it into the production model, with the Mustang logo replacing the cat to give birth to the “pony” car.

Najjar is credited with giving the car its name, which comes from the P-51 Mustang World War II fighter plane—not the wild horse. In addition to Cougar, other names that had been considered and discarded were Allegro, Aventura, Thunderbird and Torino.

Ford publicly unveiled the Mustang on April 17, 1964, at the World’s Fair in New York.

The company received 22,000 orders that day and sold some 419,000 Mustangs (initially available as a coupe or convertible) during the first year on the market.

Ford celebrated the production of the 10 millionth Mustang in 2018 (Image: Ford)

The Mustang has been produced continuously since then—one of only a few nameplates with a 50-plus-year run. More than 10 million Mustangs have been sold worldwide to date. The seventh-generation pony car is expected to debut in about three years.

Ford also is using the famous name on the upcoming Mustang Mach-E electric crossover vehicle that’s due later this year.

Halderman credited his creative talent to his mother, an amateur artist who enrolled him in art classes when he was in grade school. He later attended the Dayton Art Institute, which was headed at the time by Read Viemeister, one of the designers of the innovative but ill-fated Tucker 48 sedan. 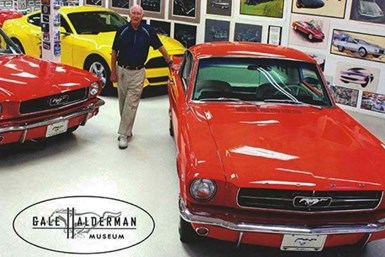 Ford recruited Halderman while he was still in school and convinced the administration to let him graduate three weeks early to join the company in 1954. He spent his entire 40-year career with the carmaker—although he nearly left in 1961 (prior to the Mustang design competition) to join Chrysler with his boss Elwood Engel.

After working on the Mustang and other notable models in the 1950s and ’60s, Halderman went on to head the company’s Advanced, Interior, Lincoln/Mercury and the Ford design studios. In addition to numerous awards for the Mustang, Halderman led the design team that developed the 1990 Lincoln Town Car, which was the Motor Trend Car of the Year.

But his passion was clear. In 2014, he created the Halderman Barn Museum (above) on his family estate in Tipp City, Ohio. In addition to a large collection of drawings, artwork and memorabilia, the museum houses Halderman’s own 1965 Mustang convertible. A fitting tribute to the man who helped create the car.

For more information about him and his most famous penmanship, check out Jimmy Dinsmore’s book “Mustang by Design: Gale Halderman and the Creation of Ford’s Iconic Pony Car.”