This year’s Detroit North American International Auto Show (NAIAS) has been canceled but will return in June 2021.

Mich. Gov. Gretchen Whitmer says the TCF Center (formerly Cobo Center), which normally anchors the show, is to be converted by the U.S. Army Corps of Engineers into a 900-bed emergency hospital to help handle Michigan’s rising number of COVID-19 victims. 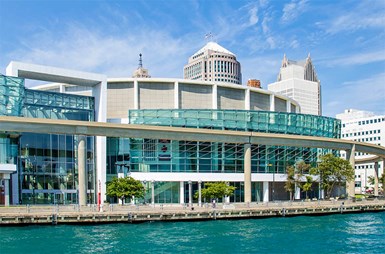 The Corps also is evaluating other sites in Michigan to become temporary care facilities. The field hospitals are expected to operate for roughly six months during the crisis.

“There is nothing more important to us than the health, safety and well-being of the citizens of Detroit and Michigan,” says NAIAS Executive Director Rod Alberts. “We support the city and state’s mission to help preserve life in the face of this challenging situation.”

Detroit joins major auto shows in Beijing, Geneva and New York City, whose events this year also were upended by the coronavirus pandemic.

The city’s North American International Auto Show, last held in January 2019, announced last year it would move to a June date beginning this year with a significant expansion in scope.

The show planned to expand to nearly 2 million sq ft by supplementing its usual exhibits and hospitality rooms at TCF Center with outside OEM and supplier displays and demonstration areas along the Detroit riverfront. In addition, the state’s Dept. of Transportation and PlanetM had organized autonomous vehicle demonstrations during the show, which were to run between downtown Detroit and the regional airport 20 miles west of the city.

The show intends to at least equal this year’s expected array of activities in 2021. Dates for next year’s show and its major events are:

Show organizers say they are developing ideas for a fundraising activity later this year to fill in for year’s canceled Charity Preview. The event has for more than 40 years raised millions of dollars per year to support multiple children’s charities in the region.