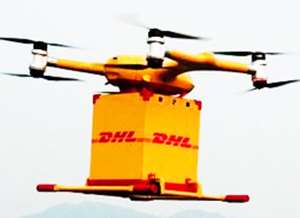 The drones, which are supplied by China’s EHang, can carry packages weighing as much as 11 lbs. The service will be limited initially to a single business customer located about 5 miles from a DHL hub in Guangzhou.

The delivery drones fly between secure delivery kiosks at the DHL facility and the customer’s site. The system cuts delivery time to eight minutes from 40 via ground transportation, and it lowers costs by as much as 80%, according to the partners. The kiosks are equipped with facial recognition and identification scanning capabilities.

DHL plans to expand the service to other customers in China later this year. The company has been testing drone delivery in Germany and other markets for several years, including shipping medical supplies to the German island of Juist.

Watch a video about the service HERE.