The two Chinese companies have already produced a few of the custom-designed cars for testing, according to multiple media outlets. 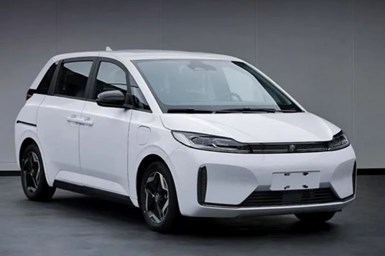 Sources tell Reuters the cars are based on BYD’s new D1 electric multipurpose vehicle (MPV), which was approved for production by the government last month. They say the vehicle DiDi plans to use will feature a minivan-style sliding door on one side and regular hinged doors on the other.

The D1 is about 14.4 feet long and weighs 3,600 lbs. The car has a range of 260 miles and a top speed of 81 mph, according to government data. The vehicle features BYD’s new “Blade” battery, whose lithium-iron-phosphate chemistry is said to be stronger, more fire resistant and tougher than current lithium-ion systems.

DiDi acquired Uber’s operations in China in 2016. It signed partnership agreements two years later with BYD and at 11 other EV makers to help it launch a car-sharing network in China.

Reuters says those deals sought to create vehicles designed specifically for ride-hailing service. DiDi offered to trade its ride-hailing expertise for design know-how, and the D1 is the first result, according to the news service.

DiDi, which dominates China’s ride-hailing market, has focused heavily on the fleet management platform it launched in 2017. The system combines data about the movement of its own vehicles with local traffic flow information to help reduce congestion by, in part, controlling “smart” traffic signals.

Reports say DiDi and BYD hope to begin offering their custom vehicles to DiDi fleet operators in China by the end of this year.

Reports about the DiDi-BYD alliance say adopting a standard vehicle design will help reduce maintenance costs and give DiDi far greater control over the pool of vehicles that provide its services. The partners have declined to comment publicly.