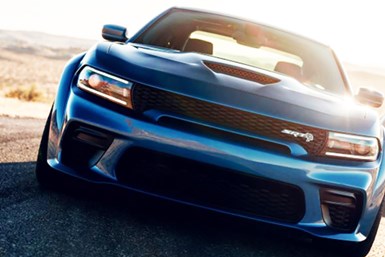 Dodge has become the first domestic brand ever to top the J.D. Power Initial Quality Study.

Dodge tied with Kia in this year’s survey, which polls owners about vehicle defects in 2020 models within the first 90 days of ownership. Rankings are expressed as the number of problems per 100 vehicles, so lower numbers mean higher quality.

This year, Power asked more questions about features that might be difficult to use, hard to understand or don’t work as expected. The result is roughly twice the number of problems that were reported last year. 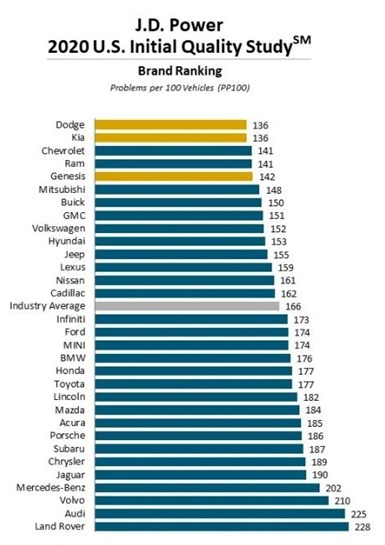 It doesn’t mean new cars suddenly became shoddier. It just means the pollsters at Power are asking more questions to find out where the problems lie.

Luckily, relative rankings can still be compared from year to year. For 2020, the results hold plenty of surprises.

Asian brands have dominated the Power study for years. Not so this time. In 2020, traditional domestic brands captured seven better-than-average ratings compared with six for products from manufacturers in Japan and South Korea.

That’s the best result for domestics since the Initial Quality Study began 34 years ago.

Consider Jeep. The brand has languished for years at the below-average end of the rankings. Not this year. Jeep came in 11th with a better quality rating than Acura, Audi, BMW, Infiniti, Jaguar, Land Rover, Lexus, Mercedes, Porsche and Volvo.

In general, most luxury marques were trounced by far less expensive mainstream brands. This year Mercedes slid from 14th place in 2019 to 28th position out of 31 ranked brands.

Ditto for Tesla. The brand debuts with a worst-of-all score of 250 problems per 100 vehicles. Tesla isn’t officially ranked this year, however, because the company wouldn’t allow Power to survey its owners in all 50 states.

The Perils of High Tech

What’s going on? Blame it on the high-tech features—particularly infotainment systems—typical for upscale brands, says Power.

One in four complaints made by respondents in this year’s survey involve owner gripes about lousy voice recognition, balky touchscreens and patchy connectivity with personal devices.

Power suggests that the big quality issue these days isn’t about things that break. It’s electronic stuff that sort-of works but drives its users crazy.

Which means simpler, cheaper cars score better. There’s no better evidence than the highest quality specific model available in the U.S. market. For the past two years, that honor went to the $91,000 Porsche 911 sports car.