Dodge is dropping its mainstream models and betting its entire future on high performance.

Last year, nearly half the brand’s sales came from two staid family models: the Grand Caravan minivans and Journey crossover. Both front-wheel-drive vehicles will bow out of the market this year.

For 2021, Dodge’s lineup—dubbed the Brotherhood of Muscle—will be dominated by muscular versions of the continuing Durango SUV, Challenger sport coupe and Charger sport sedan. All three will offer optional supercharged Hellcat V-8 engines that crank out more than 700 hp.

Tim Kuniskis, who heads passenger car operations for Fiat Chrysler Automobiles, says FCA has been yearning to focus Dodge as a pure performance brand. But instead of following the pack with more and more crossovers, it is throwing down hard on the side of ridiculously powerful cars.

Leading the parade in 2021 will be the 807-hp Challenger SRT Super Stock, whose 6.2-liter Hemi makes 807 hp and hurls the car from zero to 60 mph in less than 3.3 seconds. The model, which Dodge describes as the world’s quickest and most powerful muscle car, will go into production in a few months and reach dealerships at the end of this year.

A detuned version of the same engine—rated at 797 hp—will power the Charger SRT Hellcat Redeye. Dodge bills the car, which has a top speed of 203 mph, as the world’s fastest mass-produced sedan. The car is due in showrooms early next year. 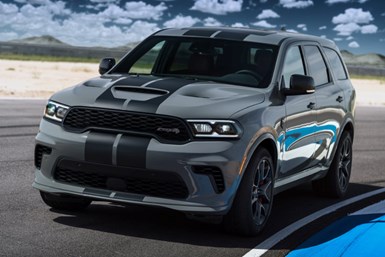 But the three-row Durango SRT Hellcat, whose 6.2-liter Hemi delivers a mere 710 hp through an eight-speed automatic gearbox, is no slouch. Dodge says the SUV can hustle from zero to 60 mph in 3.5 seconds on its way to a top speed of 180 mph. And yeah, Dodge says it’s the world’s most powerful SUV.

FCA plans to make only 2,000 of the monsters before regulatory issues end that particular engine-chassis combination in 2022.

Dodge also will dial back the power a tad with more special editions of all three surviving nameplates for 2021.

Deciding to shed the Caravan, a model Dodge has marketed since 1983, was a significant indicator of the brand’s performance resolve. Persistently strong sales have made the vehicle tough to kill off. Even last year, when deliveries fell 13%, the Caravan was still the segment’s best-selling model.

Phasing out the slow-selling Journey after 12 years was a far easier call. Last year the small crossover was the least-popular model in its segment with sales off 30% from their peak in 2015.

Dodge is obviously serious about its performance image. As the horsepower ratings confirm, this is not the usual Detroit smoke-and-mirror marketing trick.

This is Detroit muscle all the way. Ya gotta smile.