Fiat Chrysler Automobiles NV’s Dodge unit is reviving the Charger Daytona nameplate with a limited-edition model to celebrate the 50th anniversary of the race car’s debut. 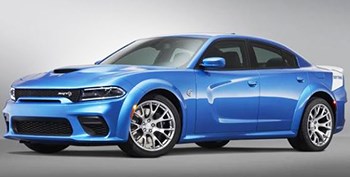 FCA claims the 2020 Charger SRT Hellcat Widebody Daytona will be the most powerful and fastest mass-produced sedan in the world. Power comes from a supercharged 6.2-liter Hemi V-8 engine that generates 717 hp and 650 lb-ft of torque, compared with 707 hp and 650 lb-ft for the base Charger SRT.

The special-edition model is 3.5 inches wider and sports wider tires than the standard Charger. Styling cues include a Daytona-badged deck lid, rear spoiler and rear-quarter decal.

Four color choices will be offered, including the original model’s “B5 Blue.” But the 2020 car won’t get its forebearer’s distinctive nose cone or massive rear wing that helped that vehicle race to 200 mph—a first for NASCAR.

Production will be limited to 501 units. This will equal the 1969 car’s manufacturing run, which was the minimum threshold needed to qualify for use in NASCAR races at the time. Deliveries start early next year.