New unit aims to build on state’s historic leadership and, more importantly, position it for the future
#tech #people #Ford

To say the auto industry is important to Michigan would be a gross understatement.

All told, the industry contributes about $225 billion annually to Michigan’s economy. More than 20 OEMs and 96 of the top 100 global suppliers have facilities in the state, including 2,200 r&d and tech centers. More than 60,000 car-related manufacturing jobs alone have been added over the past 10 years.

So, yes, the auto industry is kind of a big (massive) deal to Michigan. It’s also something the state has to constantly fight to protect and grow, especially in the face of tech disruptions—with mounting competition from Silicon Valley and other new mobility hubs—that continue to transform the landscape.

Keeping ahead of the game will require strategic thinking, collaboration and a lot of investment.

To this end, Michigan has created a new Office of Future Mobility and Electrification. It will be led by the state’s first chief mobility officer, who is expected to be hired in the coming weeks.

The group will centralize responsibilities and coordinate the activities of other government agencies, including fostering industry partnerships. Specific programs will be announced later, but the focus will be on next-generation autonomous, connected, electric and shared vehicle initiatives (collectively known as ACES). 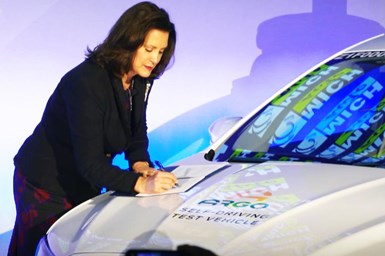 The new unit was announced by Gov. Gretchen Whitmer at this week’s MichAuto conference in Detroit. To rev up the excitement, she signed the executive directive—on the hood of a self-driving Ford Fusion sedan that the carmaker’s Argo AI affiliate developed—to establish the program.

Under a separate directive, Michigan’s 3-year-old Council on Future Mobility will be replaced by the new, but confusingly similarly named Council on Future Mobility and Electrification that will advise the state on economic development, infrastructure and workforce development policies. Comprised of a 16-member advisory panel, the revamped council will operate under the Dept. of Labor and Economic Opportunity rather than the Dept. of Transportation.

According to MichAuto’s latest Automobility report, Michigan’s 10 assembly plants produced 1.8 million vehicles (21 different models) last year. This represents 17% of all the new cars and trucks made in the U.S.

The state also is home to:

In short, there’s a lot going on. It would be nice to have a point person to help coordinate the myriad projects and plan for the future. Perhaps, someone like a chief mobility officer—even if the job title seems a little pretentious.