Add taking a selfie to the list of no-nos
#tech

Drivers know it. Yet, they are engaging in increasingly risky behaviors behind the wheel.

In a new survey conducted by Insurance.com, nearly nine in 10 respondents believe distracted driving is more of a problem than it was two years ago. Three in four think such issues are at least 50% worse. 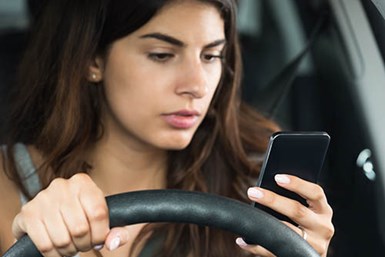 Smartphones are the biggest culprits. In addition to making and receiving calls, drivers use their phones for texting, emails, social media, blogging/video blogging and taking photos—including snapping selfies of themselves (something more than 10% of drivers have done).

Other potential distractions include operating navigation systems, dealing with kids, eating, and adjusting audio and other vehicle controls. Watching and/or motioning to other drivers also can be problematic.

Some 92% of those polled agreed that texting while driving is as dangerous as driving under the influence of alcohol or drugs. That’s up slightly from a similar study last year in which 90% felt this way.

Despite the widespread acknowledgment of the problem—not to mention that it’s illegal—more than two in five people say they have texted while driving. Of those who admitted to the activity, 11% said they text and drive daily. Another 12% do it several times a week.

About a quarter of drivers are guilty of texting on a monthly basis or a few times a year. Half of the respondents claim they have done so only a few times in their lives.

Male drivers were somewhat more likely to text than their female counterparts (45% vs. 39%). But women were more prone to text while driving with their children in the car, with three in five of all respondents copping to the offense.

No Good Reasons to Text

Why do drivers do it? The top reasons stated for text driving are:

In 2018, more than 2,800 people died in accidents involving distracted driving in the U.S., Insurance.com says, citing the Governors Highway Assn. That’s nearly 8% of all fatal crashes.

One in 12 survey respondents said they had been involved in an accident while texting.

There also can be financial consequences. In addition to being ticketed for texting (18% of drivers have received one), such behavior hikes your insurance by an average of 23% ($346) across the U.S. and by as much as 45% in California, according to rates Insurance.com received from Quadrant Information Services. One at-fault accident can increase premiums by another one-third.

Insurance.com, which compares rates from multiple companies, surveyed more than 1,000 motorists for the study. The company is owned by QuinStreet.