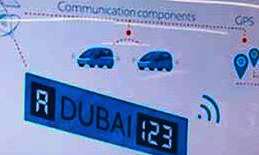 Next month Dubai will begin testing digital license plates that can display various messages, make payments and conduct other transactions.

The plates, which Dubai’s Roads and Transport Authority (RTA) calls Tag2Connect, are equipped with GPS receivers, wireless transmitters and a microprocessor chip. The United Arab Emirates capital is said to be the first city in the world to test the technology.

RTA says the plates can provide information about accidents, traffic congestion, approaching emergency vehicles and other changing road conditions. The technology also can be used to alert authorities if the host vehicle has been stolen.

Drivers who connect a smart wallet to the plates will be able to pay for parking and registration fees digitally. Vehicle ownership and other driver information can be updated as needed via a smartphone app.

RTA also envisions using the system to track traffic trends over time. The trial is due to run through the end of the year.