Given the CO2 regulations that the European Union has brought into effect for this year and next (95 g/km), it isn’t entirely surprising that Jeep has announced that it has established websites in various European markets (today sites in Italy and Spain went live; Germany, France, the UK, the Netherlands, Belgium, and Austria are to follow) for people to learn about—and preorder—the “First Edition” models of the Jeep Renegade 4xe and the Jeep Compass 4xe models, both of which are plug-in hybrids. 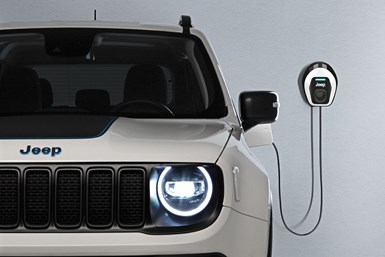 The “First Edition” models will be available for order through March 9. Then the Jeeps will roll out later this year.

The vehicles will be tailored to the specific markets, with the “Urban” and “Off-road” versions being offered, the first based on the S trim and the latter on the Trailhawk.

The vehicles have a 1.3-liter turbo gasoline engine driving the front wheels and an electric motor the rear so that there is 4x4 capability always available.

The vehicles can provide up to 50 km of range when operating in electric-only mode and can go up to 130 km/h in electric-only—which would undoubtedly reduce the 50-km range. (Otherwise, the top speed of the hybrids is 200 km/h.)

The important part of the 4xe models for the European market: the hybrids operate at less than 50 g/km of CO2.