Focus is on buses and big rigs
#asia #tech #Eaton

Eaton has been supercharging cars since 1985.

Its current system is used to boost everything from the Mazda3 small car and midsize Jaguar F Pace crossover to the Range Rover SUV, and Corvette Z06 and Mustang GT500 sports cars.

Now the supplier has its eye on bigger and more futuristic applications: fuel cell-powered trucks and buses. 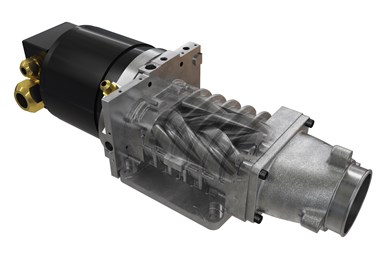 The electrically driven blower, which compresses and pumps air into the fuel stack to mix with hydrogen, provides more precise air flow. This enables rapid voltage control to help fuel cells operate at peak efficiency, according to the supplier.

Unlike its supercharger counterpart, the TVS fuel cell blower is covered by a housing and mounts directly to an electric motor. It can operate at as much as 450 volts and 14,000 rpm.

Eaton says the technology is scalable across a wide range of applications and can be tailored to customer requirements.

Eaton has been supplying the TVS fuel cell blower in low volumes for several years.

The company now is preparing to ramp up production as more fuel cell buses and commercial trucks are launched, especially in China.

It also is working to improve the system for use in next-generation fuel cell stacks, which will be longer lasting and have greater power density and pressure ratios. This requires more durable and efficient compressors, Eaton says.

The supplier aims to reduce noise and vibration of the various pumps and mechanical components. Next-generation modules also are expected to be smaller and lighter to enable greater packaging flexibility, Eaton notes.

Commercial vehicles are well suited for fuel cells because they typically have fixed routes and return to a common facility, where they can be refueled on site overnight. This alleviates concerns about the shortage of hydrogen stations until a supporting infrastructure is created.

In addition to bus companies, several truckmakers are ramping up their own efforts. This includes Hyundai Group, Toyota and its Hino affiliate, Isuzu (in partnership with Honda) and a new joint venture between Daimler and Volvo Group.

Further down the road, Eaton says it also could apply TVS blowers to fuel cell-powered cars. But that’s assuming such applications ever expand beyond the few thousand sales per year generated by the handful models currently offered.

For now, most of the effort is on the truck side.