Hyundai took the wraps off the redesigned Elantra compact sedan Tuesday night, livestreaming the unveiling from The Lot Studios in West Hollywood.

It wasn’t a star-studded event. In fact, there was no audience—due to concerns about the coronavirus, only a handful of performers and Hyundai executives were present.

But there was a lot of style and substance. Here are a few takeaways.

Hyundai Knows How to Make an Intro

After some somber remarks about the coronavirus, Hyundai North America chief Jose Munoz gave a brief overview of Hyundai’s brand vision and other recent new models. 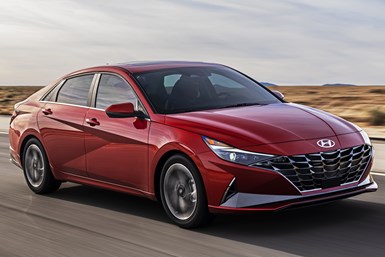 Then the show kicked into top gear. Munoz promised that the experience would be “very different” than a typical auto show unveiling.

It didn’t disappoint. A five-minute prelude featured rock concert-like lighting—highlighting the Elantra’s “parametric shapes”—Cirque du Soleil-style acrobatic dancers and plenty of special effects. Then the new car arrived over a virtual bridge and burst onto the stage.

Davis Lee, senior designer for Hyundai North America, summed up the performance: “Wow, that was cool.”

Built on Hyundai’s new K3 platform, the 2021 Elantra is bolder and bigger (longer, lower and wider) but lighter than the current model. Hyundai calls the design “sensuous sportiness,” which it introduced with the redesigned Sonata midsize sedan. 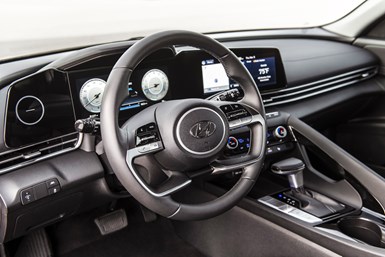 Styling is highlighted by a sleek coupe-like roofline, “character lines” that converge into a point along the middle of the front doors, an enlarged cascading jewel-pattern grille (with integrated turn signals), high-tech taillights and a stance that is designed to look like geometric crystals.

Hyundai says the car’s triangular shapes, flowing surfaces and long, low hood are intended to create a feeling of tension.

On the inside, an “immersive cocoon” is similar to that of an airplane cockpit. A pair of 10.25-inch displays (instrument cluster and touchscreen infotainment display) flow together under a single piece of glass.

Among the highlights are: 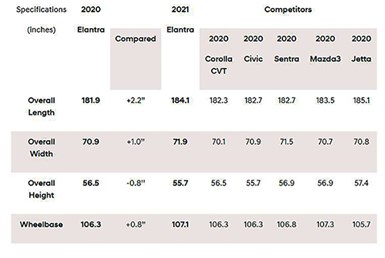 In addition, adaptive cruise control, lane centering, reverse parking collision avoidance and a safe-exit system are available as options. The latter alerts occupants in a parked vehicle when another car is approaching from behind to prevent them from inadvertently opening the doors.

Power comes from a 2.0-liter 4-cylinder Atkinson cycle engine that makes 147 hp and 132 lb-ft of torque. Hyundai predicts the engine, which will be paired with a continuously variable transmission, will provide best-in-class fuel economy.

A hybrid option also will be available, teaming a 1.6-liter four-banger with an electric motor and a 6-speed dual-clutch transmission. The combination will generate 139 hp and 195 lb-ft of torque. But the real selling point is an estimated 50 mpg-plus fuel efficiency (highway and city combined) rating.

An N-line performance variant will be added later.

The 2021 model will be introduced late this year. Hyundai will build the car at its facilities in Alabama and South Korea.

For now, you can check out the livestream below.