End of the Line for Venerable Bentley V-8

For people, 61 is a young age to retire. For car engines, it’s a record in longevity that has earned Bentley’s 6.75-liter V-8 a well-deserved gold watch and life of leisure (hopefully marked by lots of non-Sunday driving).

The British luxury marque produced the last of the venerable V-8s this week at its Crewe facility in England. The engine is fitted in a special edition of Bentley’s flagship Mulsanne sedan, which also has come to an end after a 40-year run of its own. 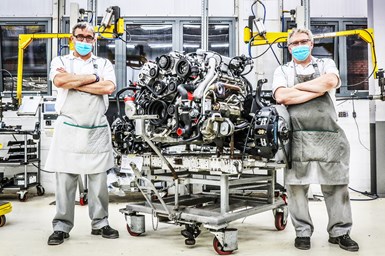 During the 61-year production run, Bentley produced some 36,000 of the so-called L-Series mills. That works out to an average of less than 600 units per year.

But there’s never been a better case to apply the old adage “quality not quantity.”

Fittingly, the last Mulsanne is a 6.75 Edition by Mulliner, Bentley’s bespoke coachbuilding operations. This means it’s highly customized with even more lavish appointments—and loads of commemorative badging—than a typical Bentley.

The treatment includes cutaway schematic drawings of the engine, which many have hailed as a work of art, integrated into the car’s gauges and clock.

Bentley, which was owned at the time by Rolls-Royce, began developing the L-Series V-8 in the early 1950s. Senior engine designer Jack Phillips was tasked with creating a more powerful engine than the 155-hp, 4.9-liter straight-six unit it would replace, while fitting in the same space and with no increase in weight.

The resulting V-8, which debuted as a 6.2-liter mill, made 180 hp and weighed 30 lbs less than the I-6. It featured an aluminum block with wet liners and porting inspired by the Rolls-Royce Merlin aircraft engine.

Updated versions of the V-8 were used in most of the two luxury marques’ models over the next four decades. Rolls stopped using the engine when the company was acquired by BMW in 1999.

Over the years, Bentley and Rolls adapted and refined the V-8 for new applications. Changes included:

Engine capacity was upped to 6.75 liters in 1971 by increasing stroke from 3.6 to 3.9 inches, which also boosted torque.

The launch of the first-generation Mulsanne in 1980 led to several changes to improve the V-8’s efficiency and vehicle safety. This latter included a collapsible water pump.

The engine was overhauled again with the launch of the current Mulsanne in 2010. More than 300 components were reengineered or replaced, including new pistons, connecting rods, crankshaft and cylinder heads, which allowed for variable valve timing and cylinder deactivation.

The latest variant of the L-Series produces 530 hp and 811 lb-ft of torque, which was a record at the time. Emissions were cut by 15% over the previous models—and were 99% lower than the original 1959 V-8, according to Bentley.

Moving forward, all Bentley cars (and crossovers) will use powertrains developed by Volkswagen Group, which acquired the British carmaker in 1998.

This will include VW’s high-powered W-12 mill, sporty 4.0-liter V-8 and plug-in hybrid 2.9-liter V-6. The Flying Spur, which replaces the Mulsanne at the top of Bentley’s lineup, will get the plug-in hybrid treatment in 2023.